BANGKOK (IPS Asia-Pacific) – Just about everyone talks about the ‘ASEAN Community’, but how can media report better on what this means to South-east Asia’s 500 million people?

This was the question discussed at a Sep. 29 discussion on the role and challenges of journalists in the context of the ASEAN Community in 2015, held as part of the Thai Broadcast Journalists’ Association annual meeting this year.

He suggested that there should be at least one hour’s worth of news related to ASEAN on television, and one page dedicated to the matter on newspapers.

IPS Asia-Pacific director Johanna Son pointed out that while the recall of ASEAN was high because coverage is dominated by stories about its summits, there are not enough stories that dig into what changes the community will start to bring about in 2015. “But ASEAN is not just about the leaders because the word ‘community’ means the constituency that ASEAN is supposed to serve,” she said.

And unlike foreign journalists, for South-east Asian journalists the ASEAN story relates to their daily lives as citizens too and are not just another story they can report on and then leave the country or region later.

Perhaps there also is not enough focus on ASEAN as a multi-issue beat. She added, “I’m making a pitch to news desks to invest in ASEAN as local issues.”

Thepchai Yong, until recently head of the Thai Public Broadcasting System (Thai PBS) said ASEAN citizens needed to get to know each other better, and that part of the challenge in reporting ASEAN is that the word ‘ASEAN’ is identified with the organization and not wider issues. But the important stories are not just about the organization, he pointed out. 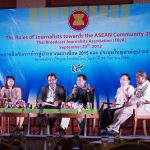 He added, “Before journalists can sell the identity (of an ASEAN community) to locals, they must believe in it.” He explained that for journalists to think and report critically, they should understand and know the history and values of the ASEAN charter with its flaws and shortcomings.

Nattha Komolwathin, an anchor from Thai PBS, was the moderator of the discussion. (Elaine Huang)