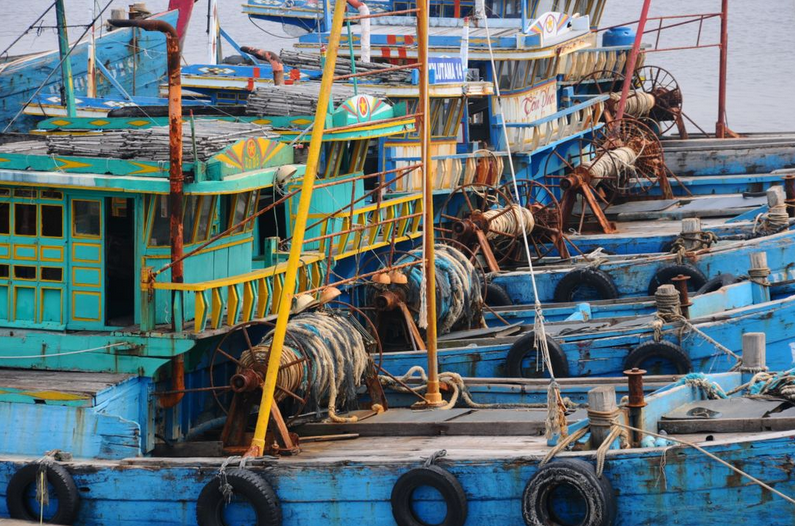 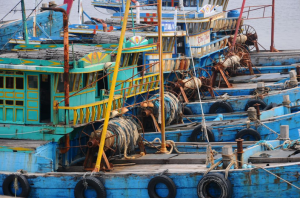 PONTIANAK, West Kalimantan, Indonesia (IPS Asia-Pacific) – At Kapuas River in Kubu Raya, boats are lined up in front of the Pier Supervision Station of the Marine Resources and Fisheries (PSDKP). Most are large in size, but their conditions vary, with some vessels in good condition and others, not at all.

Not far from the station are a few more boats parked on a man-made river. Most of the vessels have been severely damaged. PSDKP staff Yudi Gusworo takes us to see these boats, which turn out to be among those confiscated by Indonesian authorities from 2008 to 2012. Most of them come from Vietnam, Thailand, and Malaysia, and there is a really large one from China. Yudi tells us how fish are being stolen from Indonesian waters. Although Indonesia, the world’s largest archipelago, has been monitoring its waters, illegal fishing in its territory is still happening quite a lot.

So far in 2012, Pontianak authorities have caught 12 fishing boats in illegal fishing. These are the vessels lined up on the PSDKP dock in Sungai Rengas.  Most of them had contained up to 20 to 30 tonnes of fish. Yudi tells Pontianak Post: “Every month, we capture an illegal fishing vessel, usually from Vietnam.”

According to Yudi, the number of illegal boats caught that year increased sharply from the 2008 figure of six. He says, “There is a graph that starts low, then shoots up, and then shows a decrease.”

From 2008 to 2012, PSDKP Pontianak captured a total of 58 illegal fishing boats. Of this number, 37 already have permanent legal verdicts (inkracht) while the cases of nine vessels are still on appeal.

Indonesia has maritime borders with Australia, Timor Leste, Papua New Guinea, Palau, Philippines, Vietnam, Thailand, Malaysia, Singapore, and India. Its marine territory covers some 5,877,879 square kilometres, most of which are teeming with fish. The vast area, however, is difficult to monitor, especially with a limited number of patrol boats. Across Indonesia, authorities catch hundreds of foreign fishing boats in the country’s waters each year.

The Ministry of Maritime Affairs and Fisheries of Indonesia estimates that illegal fishing costs the country 30 trillion rupiah (about 3.11 billion dollars) annually. But the People’s Coalition for Fisheries Justice or KIARA believes the real figure is more than 50 trillion rupiah (5.2 billion dollars). Says KIARA Executive Director Muhammad Riza Damanik: “The loss of 30 trillion rupiah, that’s just based on the value of the fish (the illegal fishers haul away). It does not include things like tax income. Plus there’s the damage to the ecosystem.”

But it was worse before the establishment of the Ministry of Maritime Affairs and Fisheries in Indonesia. Illegal fishing was such a serious problem that the government of then President Abdurrahman Wahid formed a separate department in charge of marine issues to deal with it. “Illegal fishing was very rampant, and was already spreading to the Java Sea and the Strait of Karimata,” Yudi says. “After we began to have patrols, the numbers began to decline. But now they are moving into the South China Sea.”

He recounts that in its early days, the maritime affairs and fisheries ministry had only a few patrol boats.

“It could not cope with the number of illegal fishing vessels in Indonesia,” says Yudi. But the ministry soon acquired more surveillance boats, and the number of vessels caught increased. Says Yudi: “We have investigators, and once the prosecutors have all they need, the case is submitted to court.”

The illegal vessels now at the port here were caught in the Strait of Karimata, Natuna Sea, and South China Sea. These waters are the entrance and exit points of foreign vessels that fish illegally in Indonesia’s marine territory. Authorities say that among the illegal fishers’ usual tactics to deceive local authorities are the use of the Indonesian flag and the employment of Indonesian crew.

Melda Kamil Ariadno, chairman of the Institute for International Law at the University of Indonesia, says that a key factor that drives illegal fishing in Indonesian waters is the overfishing that the home countries of these illegal fishers are suffering from. These include the likes of Thailand and Vietnam, which have fishing waters that are relatively narrow and where the fish population is in decline. But they are also countries where the demand for fish is ever growing; Thailand, for example, has a large fish-canning industry. Many fishers in these countries thus turn to Indonesia and its vast, full fishing area.

Yet while the Indonesian government has been trying to tackle the problem of illegal fishing, many say that such efforts still fall short. Bambang Nugroho, head of the Central Monitoring Station of the Marine Resources and Fisheries here, for one says that increasing the number of patrol boats is not a complete solution. He says, “Our boats are (simply) not enough. The thieves far outnumber them.”

Mida Saragih, knowledge management coordinator of KIARA, meanwhile says that Indonesia has yet to address illegal fishing head on. The activist says that this can be seen in the continued existence of Article 29, paragraph 2 of the Fisheries Act, which allows foreign vessels to enter national waters; the reduced budget allocation for monitoring Indonesian waters; and the lack of synergy in the handling of illegal fishers out on field.

Mida says that as a result, Indonesian fishers – especially traditional fisherfolk – are often left to deal with illegal fishers on their own. This is usually the case in border areas such as in East Kalimantan and North Sumatra where Indonesian fisherfolk often face fishing trawlers owned by foreigners, including Malaysians and Filipinos.

Mida Saragih says that the illegal fishing issue cannot be resolved within a national-policy framework and needs to be tackled within a regional one. This is because the problem involves many countries, with foreign nationals being caught in Indonesian waters. While some crewmembers among these foreigners are deported, those who are higher ranked such as the captain and the technical crew often have to go through the Indonesian court system.

That’s why some parties have been looking towards the Association of South-east Asian Nations (ASEAN) and asking whether it can step up to solve illegal fishing. The issue has actually come up in a number of meetings at the ASEAN level, including those by the ASEAN Maritime Forum (AMF) and the ASEAN Sectoral Working Group on Fisheries. The third meeting of the AMF was held in the Philippines in October 2012, while last June, the ASEAN Sectoral Working Group on Fisheries met in Jogjakarta. Among the topics discussed there were the security of marine natural resources and illegal fishing.

Mida Saragih concedes that bodies such as the AMF discuss illegal fishing. But she says there has not been much progress on the issue even in this forum, with discussions yet to produce anything concrete.

“We also found that at the ASEAN level, the discourse of handling illegal fishing has not advanced from the manufacture of a special forum in it (ASEAN Maritime Forum),” she says. “Its achievements are nothing more than the manufacture of trade agreements.”

She adds, “There should be a strong willingness of officials in ASEAN to protect fishery resources in South-east Asia, for these to prosper, and for the sustainable use of (these by) traditional fisherfolk.”

Meantime, back at the PSDKP pier, Yudi is pointing out how the confiscated illegal fishing vessels have been deteriorating and decreasing in value. He says many of them cannot be used anymore, while others have sunk. There are also a number of boats that were deliberately sunk to become, ironically enough, homes for fish. Yudi says, “It’s too bad when (the boat) just deteriorates or sinks.”

To read the other parts in these series:

(*This report was carried out under the IPS Asia-Pacific reporting series ‘Reporting Development in ASEAN’, supported by the International Development Research Centre. The text was translated from the original Indonesian version.)

Reporting ASEAN is a homegrown, independent venue for the discussion of news and issues around regionalism, one that highlights voices and views from within Southeast Asia. This includes covering the idea of an ASEAN, which goes far beyond the regional association ASEAN.

Started in 2014, it follows conversations around the news media and journalism in Southeast Asia, be it interesting ways of storytelling to disinformation and misinformation.

© 2021 Reporting ASEAN – Voices and views from within Southeast Asia. All Rights Reserved.