BANGKOK, Jun 2 (Reporting ASEAN) – Faith and religion are not the usual topics discussed at meetings about ASEAN, but neither are its usual attendees saffron-robed monks, priests in crisp white barong shirts or Muslim representatives in eye-catching batik.

The Mar 26-27 consultation with 30 ambassadors from various faith-based groups, spiritual communities and educational institutions in Southeast Asia was the first of its kind to discuss the role such organisations could play in the larger ASEAN Community. 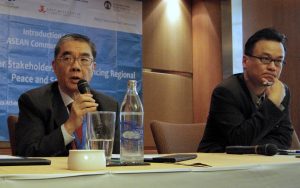 “The religious groups and the faith communities are always on the ground, so if we want to create an ASEAN community, we must bring in all these partners, the stakeholders,” Ong Keng Yong, former ASEAN secretary-general and ambassador-at-large for the Singapore government, said at the event.

ASEAN is home to 625 million people across 10 countries practising different faiths – mainly Islam in the southern part of the region, Buddhism in the north and Catholicism to the east.

Religion is deeply intertwined with Southeast Asians’ everyday lives. Many Thais and Burmese have been novice Buddhist monks at some point while eight in 10 Filipinos identify as being Roman Catholic. The market for halal-certified products boasts a consumer base of 300 million people from Indonesia, Malaysia and Singapore.

“Faith is a very strong identity marker in ASEAN. Faith-based groups are highly influential,” said Aviva Nababan, member of the governing board of the Human Rights Resource Centre (HRRC), an academic research centre based in Jakarta that co-organised the civil groups’ consultation on ‘Introduction to ASEAN Community 2025: Engaging a Wider Stakeholdership in Enhancing Regional Peace and Security’.

Given that they work with local communities, are active in charity work and help during humanitarian disasters, the faith-based groups discussed how their work could contribute to deepening socio-cultural and other linkages in the ASEAN Community.

“More and more segments of Southeast Asia need to be involved and to be committed in building this home we call ASEAN. In order to advance toward the ASEAN motto of ‘One Vision, One Identity and One Community’, certainly more can be done to exploit and harness this deep and long history of our collective religious and spiritual diversity,” said Chong Ming Hwee of the Baha’i International Community, which has its regional office in Jakarta.

To understand what ASEAN plans to achieve in the next 10 years as part of its ASEAN 2025 vision, the participants broke up into groups and were tasked with looking at the goals for the three pillars of the Community – the political-security, economic and socio-cultural.

Many had never heard of the ASEAN Blueprint 2025 before, echoing the lack of awareness in the region. “When I came here, that was the first time I read the ASEAN document. When it comes to religions, I have a very localised view and I have a very global view. I don’t have a regional view and this is what a lot of the faith organisations need,” admitted Foo Check Woo of the Inter Religious Organization based in Singapore.

However, they were soon dissecting the key elements of the plans, pointing out areas for improvement.

Many said that despite the launch of the ASEAN Community in December 2015, ASEAN has yet to become an integral part of people’s everyday lives.

“The ASEAN population, they cannot feel (ASEAN’s presence), it is not part of their world view. They cannot see how ASEAN impacts them. Even though it may have some impact in their lives, it is not the sort of impact that can be observed and therefore it is not something they consider as being part of their lives,” reasoned Asrul Daniel Ahmed, chief operating officer and chief of research at the Kuala Lumpur-based Global Movement of Moderates Foundation.

For some, the concept of an ASEAN identity is more an ideal than a reality. “There is no such ASEAN spirit. ASEAN spirit is based on the spirit of member states, so there is no one spirit,” said Sriprapha Petcharamesree, professor at Mahidol University and former representative for Thailand in the ASEAN Intergovernmental Commission on Human Rights (AICHR).

Consultation and sharing being a key part of the forum, the participants spent time relating their experiences of employing religious views to help the greater community. A well-received example was how Muhammadiyah Indonesia, the country’s second largest Muslim organisation, used religious edicts to spread the anti-corruption message.

Other suggestions included having a regional association comprising different faith groups and a liaison officer within the ASEAN Secretariat that would deal directly with these groups, creating a direct line of communication between them and policymakers.

“We shouldn’t see every problem as a nail because we think we are a hammer and try to hit everything,” Lee Yoong Yoong, director of the community affairs directorate at the ASEAN Secretariat, cautioned as he urged participants to be realistic in their suggestions. Proposals from the consultation will be sent to the permanent representatives of ASEAN member states at the ASEAN Secretariat.

Group photo of participants at the meeting Photo: Mia Gomez

While the forum was a platform to engage and dialogue between ASEAN and religious institutions, it also threw into stark relief the issues that still surround true integration in the ASEAN Community.

Although there have not been any regional conflicts since 1975, a rise in communal violence and religious intolerance is a worrying trend in Southeast Asia. Buddhist extremism disguised as nationalism is growing in newly democratic Myanmar, Brunei banned Christmas celebrations after imposing sharia law in the sultanate and minority religious communities still face regular persecution in countries such as Vietnam, Malaysia and Thailand.

“Politicians have found it convenient to exploit religion and invoke it to boost their popularity, gain followers or discredit their opponents,” said HRRC’s research and project coordinator Faith Delos Reyes. She stressed that the onus was on moderate religious leaders and organisations to create the right conditions for protecting religion and reducing religious conflict.

Instead of looking inward, faith-based organisations were encouraged to embrace the fundamental right to freedom of religion. “Where you have faith-based initiatives, as far as possible they should be inclusive, they should not be exclusive. Otherwise, you are actually perpetuating the narrowness of one religion helping its own people,” reasoned N Varaprasad of the Singapore Hindu Centre.

The participants voiced the need to involve individuals more in the decision-making process of ASEAN projects, especially since a core tenet of the 2025 roadmap is the creation of a people-oriented, people-centred ASEAN.

“I think we need to have a paradigm shift as well looking at things because we are conditioned to focus on our political leaders. How about the people’s participation that will include decision-making and a paradigm shift that will have a new channel using the respective faiths and religious institutions to guide its followers and adherence?” suggested Musa Mohamad Sanguila, director of Pakigdait Inc, who has spent 15 years working on platforms for interfaith dialogues between evangelical and Muslim communities in Mindanao, southern Philippines.

Another concern was how dialogues like the May consultation can be translated into action. With about 1,400 meetings in a year, ASEAN has often faced criticism for being an avenue more conducive for talk rather execution.

“For me I come with a wondering mind…. How can our ideas, what we contribute here, how can it be applied to concretise the ideas we share?” asked Lao monk Sayadej Vongsopha.

Despite initial reservations, many religious representatives went away welcoming this new initiative to engage faith groups in building a cohesive and united ASEAN Community.

As Father Angel C Calves, a Spanish national who has lived on Mindanao for the past 44 years, said, “I feel the need to listen to the situation of the countries, especially concerns of the faith-based communities… This is a very enlightening experience for me.” (END-Edited by Johanna Son/Reporting ASEAN)